What is IRS Section 179 and how can it benefit me?

It is at this time of the year that all office technology dealers seem to make their final push for sales. Will they make their quotas or will they go bust? For this reason your technology sales person is armed with a bevy of closing incentives. 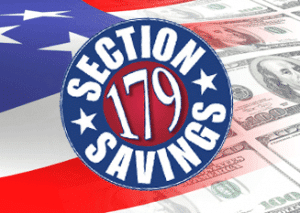 Do any of these closing tools really entice you to buy? In some instances I think they do! If it was your intention to make the purchase prior to the end of the year then these added little tidbits could actually persuade you to “lean” in a particular direction. For those of you that have resolved yourself to waiting or not really needing it, I’m not too certain they make or break that deal?

There is however, one little perk that might make sense to take a  close look at: IRS Tax Code Section 179

The original piece of legislation was a part of the Bush-era stimulus package that basically allowed business to write-off 100% of a equipment purchase or lease in year 1. At the time of it’s original approval the numbers were huge (somewhere in the $500,000 range), now those incentives have dwindled to a mere $25,000. Still in all, if you are looking to gain a tax advantage for fiscal 2015 and have some profit to offset, this could help.

Before I go any further (this is the disclaimer), I am NOT a tax professional so please seek the advice of yours prior to making any commitments. There is also a great website for Section 179 which may be found at  https://www.section179.org/section_179_deduction.html

Let’s take a look at a really basic example and see if we can shed some light on the law. Supposed you purchase or lease a brand new Kyocera TASKalfa 3551ci color copier for $10,000. Normally your accountant would advise that you deduct $2000 per year for the next 5 years for depreciation. If your company showed a $10,000 NET Profit, then in year one you could deduct $2000, effectively now only paying taxes on the remaining $8,000. Still you are stuck paying taxes. Taking that same example and applying Section 179 rules, you could take the entire $10,000 in year 1 effectively reducing your NET Profit to $0 and not owing any further tax burden. Remember, as of 2015 the maximum deduction that may be taken is $25,000, so if you purchase/lease something for $50,000 the most you could deduct would be $25,000. Still, not small potatoes and for small to medium sized businesses that are looking for a tax break, this could be ideal!

Keep in mind that you only have until December 31, 2015 to make the purchase and have it qualify for this years tax incentive. This certainly doesn’t mean that Section 179 won’t be available next year, however as stated earlier, the code originally offered a $500,000 benefit and now it’s been reduced to $25,000. Who knows what the 2016 laws will bring (if anything). To find out more or if you are looking for someone to help you spend some money, I am always here to help!